When Jimi Hendrix took the stage at the Monterey Pop Festival in 1967, it was the first time he had ever headlined in front of an American audience.

After watching The Who end their set by smashing their instruments on stage, he knew there was only one thing left to do:

He doused his guitar with lighter fluid, kissed it, lit on fire, and smashed it to pieces before throwing the remains into the audience. The rest is history.

Think about this moment often, then take this blanket along for the adventure.

Because of their handmade nature, the colors and details will vary on each blanket (scroll down for more info).

Remember your favorite blanket as a child?

You're a grown-up now.

And this is your new Adventure Binky. A Blanket For Life

From music festivals to romantic nights under the stars, and from the back of your truck to the edge of the Grand Canyon - the Monterey Adventure Blanket from Trek Light Gear is your new best friend.

This midweight blanket is soft to the touch to keep you warm and cozy on cold nights and still plenty big enough to share with a friend.

Made Ethically & Sustainably By Indigenous Artisans

It all begins with clothing.

Every blanket is made from excess clothing materials - first, shredded into a pulp, and then repurposed into yarn.

By repurposing high-quality materials and preventing them from ending up in the landfill, we're able to minimize our environmental impact and create less waste for our planet.

So, that's the material, but what about the process?

Every blanket is handwoven in Mexico on a traditional wooden pedal loom by Indigenous artisans continuing a long tradition of craftsmanship and creativity.

The best things aren't made in factories. And that's why our artisans also continue the tradition of home weaving - allowing them to determine their own hours, wages, and workload.

As a handmade and handwoven blanket, there may be variances in the details, and the hue of the blanket colors may be slightly different than what's pictured. Imperfections and variances are part of what makes handwoven art special (just like you)!

Blankets that feature curved or circular designs will typically have a small amount of spacing around the curved transitions. The looser threads around the curves are a normal part of the traditional weaving process and they do not affect the integrity of your blanket. If you don't like the way it looks, you can easily just push the threads closer together with your fingers and the gap will magically disappear!

Every blanket is beautiful in its uniqueness so you should feel comfortable that you'll get a blanket you'll be happy with - but if you have questions about this please feel free to contact us before you order! Feel Good. Do Good. Pass It On.

For every item sold, we work with Trees For The Future to plant a tree in your honor.

Why is that so powerful? By helping small farmers and villages around the world with the planting of fruit & vegetable trees, shade trees and more, together we're going beyond basic environmental change.

Trees For The Future uses a Forest Garden approach to reforestation - planting trees to not only provide environmental benefits, but also food, income, and community agriculture where it's needed most.

Every purchase creates a chain reaction of good and happiness in the world, and it all starts with you.

Shipping
PROCESSING TIME
COVID-19: Our warehouse is continuing to take all necessary measures to ship orders with the highest safety standards. Life may feel like it's returning to normal in your local area (we hope!), but the impact of COVID-19 is still extremely present in the world of shipping and fulfillment.
We're still experiencing longer fulfillment times than normal so we sincerely appreciate your patience and understanding during this time. These delays can impact both the time it takes to ship your order and the delivery of your order by the carrier.
Our standard policy is still detailed below for your reference.
We know what it's like to order something online and want to have it in your hands as quickly as possible. We ask that you allow us 1-2 business days to process your order and get it ready to ship, however we do everything we can to get orders out the door as soon as they come in - which means most packages will ship the very same day you order.
Our shipping takes place Monday through Friday - any orders placed over the weekend or after our mail pickup will be shipped the next business day whenever possible.
PRE-ORDERS / BACKORDERS
We offer the ability to pre-order and backorder some items on our site when they are not yet in stock. If an item you are purchasing isn't currently in stock, you'll see a note displayed in your shopping cart that indicates the expected shipping time for your order.
Please note that the expected shipping time is an estimate based on when we expect to receive new inventory.
Sometimes it takes us even longer than expected to receive inventory (especially with unpredictable COVID delays) and sometimes we receive inventory much sooner than the timeframe we estimate. Your order will always ship as soon as the inventory is in our hands!
We aren't able to split-ship your orders into multiple deliveries - so if you are ordering an item that isn't currently in stock along with other items that are, please be aware that your order won't ship until all items are in stock. If you're anxious to receive the in-stock items, we recommend placing a separate order so you can receive the in-stock items without delay.
DELIVERY TIMES
If you choose an option like "Express (2 Business Days)", please remember that isn't a guarantee that the order will be there exactly two days from the moment you order it - we still need time to pack & ship your order (see above).
CARRIER/SERVICE INFO
Please see our Can I Request A Specific Shipping Carrier? page with important details on which carriers we offer and how to make sure you get your package delivered properly.
INTERNATIONAL SHIPPING
When receiving an international order your package will need to pass through Customs in your country. All of our packages will have a Customs Declaration Form which details the items in your package and their value.
PLEASE NOTE: There are almost always additional charges to receive your package when you order from outside your own country - these charges are Customs Duties and Import Taxes which are your responsibility to pay (often before you are allowed to collect the package). The laws and taxes are different in every country and Trek Light Gear has no way of knowing in advance what these taxes and fees will be. Please be aware of this when placing your order, we don't want you to be surprised when the package shows up and you owe additional money!
If you have any additional questions about international shipping methods or rates just let us know!
Our Promise

As you've likely seen on our website, we stand behind our products with what we call our Happiness Guarantee. So, what does that mean exactly?

In a nutshell: We want you to be happy with what you buy from us, and if you aren't - you've got our promise that we'll always do whatever we can to bring you happiness.

Within reason, right? Maybe you're sad because everything in our store doesn't cost $1, or you wish our 30-day return window was actually 3 years - well, we need to have some policies and rules so we can survive as a small business.

What matters is that we're here for you.

We truly care about your happiness, and will always do what we can to help - maybe it's a discount on your next order, store credit for a future purchase, or just going out of our way to make sure that the next item you buy from us is exactly what you want.

Feel Good. Do Good. Pass It on.

If for any reason you're not happy with anything you ordered from us, just send it back to us within 30 days by following the instructions below.

The product must be in unused or 'like-new' condition - you're welcome to try a product to make sure you like it, but we cannot accept returns that are abused, stained, washed/laundered, or otherwise damaged (unless the damage is the result of a manufacturer's defect, in which case it is covered under our Lifetime Warranty).

Holiday Extension: All purchases made in November or December will be allowed an extended return window thru 1/31. We'll make it easy for the gift recipient to handle any returns or exchanges!

To view our full return policy details and initiate a return/exchage of your product, just click the button below!

I’ve bought two blankets with TLG and couldn’t be happier. The blankets are beautiful and well made. The customer service is amazing and their commitment to making a positive impact is inspiring. I’ll continue to buy more blankets and spread the word about this great small business.

Fantastic product. Suggest washing before use to remove any fuzz. Yes, you can find the same blanket on the streets of TJ for like $5, but this saves you the trip. Super soft, decent size (wish it was a foot longer and wider), and nice colors, very vibrant. Will probably order again at some point. 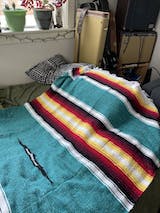 Honestly I haven’t been out of this blanket since the day it arrived. The funny thing is I bought it for my boyfriend but I kind of completely stole it. :) great quality, great colors, and comfy!! 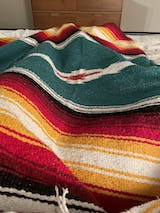 I purchased because of the "take what discount you need" and wanted to support such an awesome idea/company, and I will DEFINITELY be back!! This blanket is BEAUTIFUL and sooo soft! My roommates were surprised too and keep commenting how soft and warm. It's now the favorite blanket on the couch! I also love that it's handmade and supports artisans in Mexico. If you're on the fence, definitely buy. I'm thrilled and will definitely be back (for myself and gifts for others!). Love that the business is locally owned in Colorado too. Big, big fan of it all! See picture of our cute puppy with blanket in the background.

A
A.P.
The perfect blanket!

I LOVE this blanket! I purchased this to have for outside activities, specifically sitting outside on my deck during cooler nights. However, since the second I brought it home, my boyfriend is obsessed with it, he curls up on the couch and will hardly let go so I’ll have to get another for myself for taking outside! It is soft, well made, and has a great price for the detailed craftsmanship that clearly went into creating it! Very excited to purchase more Trek Light blankets soon. Highly recommend this product for those looking for a warm, comfortable and cozy blanket! 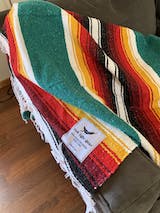