I started my freshman year of College at the University of Colorado, Boulder in the Fall of 2014 (which honestly feels more like 40 years ago than just 4).

Coming from a small town in Connecticut, I was thrilled to take advantage of the incredible opportunities which Boulder and the rest of Colorado had to offer: nightly live music, people passionate about social and environmental justice and a seemingly endless amount of mountains to traverse, both on foot and on my snowboard. However, as most college freshmen tend to be, I was rather nervous about the idea of finding an entirely new group of friends in an unfamiliar place.


On my first day of classes, after getting hopelessly lost trying to find the Duane Physics and Astrophysics building, I planned to meet a friend on Farrand Field. Unfortunately, they misread their schedule and had to run to class during our planned meetup time, and I was left to wander Farrand Field alone.

Although there were no shortages of groups of people hanging out, throwing footballs and listening to music, it was a rather intimidating task to just walk up to a group of people and introduce myself. That is, until I saw a group of people sitting by a tree on the Western side of the field.

There, I saw a long-haired, tie-dyed clad group of people, many of whom were sitting in hammocks which they had attached from the large tree to various places along the black fence which lined Farrand Field. They were hula-hooping, playing music and hacky-sacking, and from a distance I could tell they seemed exactly like my kind of people.

As I walked up, I noticed that I recognized one of the guys in the group from freshman orientation, and he got up from his hammock to greet me.

His name was Patrick Hayes, and he would turn out to be my roommate for the next 3 years and a lifelong friend, but at that time he was just a friendly face in a crowd of strangers. Pat explained that this was the choice hangout spot for his group of friends, and that all were welcome. He also explained that this spot was called Tree 124, or simply “the tree” for short, because of a small metal tag engraved with “124” which marked this tree from all the rest.

The very next day, I set out to purchase a hammock so that I would have a spot of my own at Tree 124. As I fortunately came to find out, Trek Light Gear was based in Boulder and I didn’t have to look far or wait for a package to arrive - a quick stop by their kiosk on Pearl Street and I was ready to hang with my newly found friends.

Over the course of my freshman year, I would spend almost every free moment before, between and after classes at Tree 124. It was in our hammocks that we would cram information into our heads in the minutes before exams, meet before concerts and parties, and camp out to watch lunar eclipses and meteor showers.

While some faces left our group of tree-people (such as my friend Alex who moved to Bonaire to become a full-time scuba diving instructor - how cool is that?!), the core group of Tree 124 stayed relatively unchanged and many of these people remain some of my closest friends.

Now that I have graduated from CU, it has been a while since I've been back to Tree 124. However, I know that if I visited campus on a sunny September afternoon I would find a new group of kids, with their hammocks tied from tree to fence, enjoying the beautiful Boulder weather and each other’s company.

It’s an unexpected feeling to owe so much gratitude to a single tree and even a local hammock company for playing an important role in shaping my life and bringing my group of friends together - but here’s the truth:

If anyone ever catches wind of CU Boulder Landscaping’s plan to remove those trees on the edge of Farrand field, please contact me so I can promptly chain myself to Tree 124 in protest. 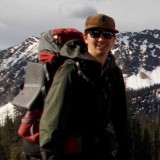 Will is a 22-year-old graduate of the University of Colorado, Boulder and has been working for Trek Light since May of 2018. He is an avid traveler, backpacker, snowboarder and scuba diver and, of course, loves his hammock!